Why did Jessica break up with Brandon?

In a random Starbucks, Jessica says something terrible: “Brandon, either you speak to me, or I leave you”. Brandon speaks, and she leaves him. In a way, the perfomance’s toast, but the play, perhaps as insignificant as it is universal, is the beginning of an intriguing theatre documentary following the very real footsteps of a drone pilot turned whistleblower.

With the help of various tools (video games, projections, digital music etc.), the two actors create a live reconstruction of a “digital native” puzzle, in which each piece touches upon the complex notions of a hyper-connected society.

Ranging from gesticulated conference to Brandon’s personal tragic tale, the show is a fun, interactive way of immersing yourself in the geek world, in which the real and the virtual overlap with tragic, yet unremarked, consequences.

Compagnie MAPS is a belgian theatre collective whose work and original writing revolve around social and societal reflections.

A playwright, actor and theatre director, Emmanuel majored in Philosophy at the Université Libre de Bruxelles, and then graduated from ESAD (Ecole Nationale de Paris) in Dramatic Arts. As an actor, he's worked along directors like Philippe Beheydt, Lorent Wanson, Frédéric Dussenne, Joëlle Cattino and Roland Mahauden. He's the cofounder of Compagnie MAPS in Belgium, in the context of which he created and directed "UNTITLED" an Iranian theatre festival inspired by a series of trips he took in Iran in the early 2000, as well as pieces "Un fleuve à la frontière" and "Exils 1914". His first personal project, "Pourquoi Jessica a-t-elle quitté Brandon?" held its premiere in 2018 at Théâtre de la Vie, in collaboration with Festival de Liège and Atelier 210. The show received two awards, the Label IMPACT 2021 and Prix des Lycéens 2020 at Festival Impatience in Paris, and was nominated for a Prix Maeterlinck de la Critique Presse, the Belgian Critic's Awards, in 2019. After conducting field research in Belgium, the Democratic Republic of Congo and the Antarctic, he wrote "La Ronde Flamboyante – pièce (il)légitime d’un fils du colonialisme" (The Burning Merry-Go-Round – (Il)legitimate Piece by a Son of Colonialism), which received the French E.A.T. Award, a Beaumarchais scholarship, was supported by la Chartreuse-CNES, and published by édition Les Cygnes. The show premiered at Théâtre de Liège (Emulation 2021) and further presented at Théâtre des Martyrs de Bruxelles (2023). Emmanuel is currently developing a new project "Tu seras un homme mon fils" (You'll Be a Man, My Son) with the support of la Chaufferie Acte-1 and FWB. In 2022, he was invited by Théâtre National (Festival XS) to present "Un pays sans rivière" (A Riverless Country).

Born in Brussels in 1983, Pierre is a pianist, lecturer, radio presenter, professor, actor and author with performances in Europe and Asia (Belgium, France, United Kingdom, Iran…). Additionally to various recitals, chamber music and orchestra concerts, he has taken part in various theatre projects alongside Emmanuel De Candido, working as musician, actor or composer (Novecento by Alessandro Baricco, Comme une larme sur un sourire by Pierre Solot, Un Fleuve à la frontière by Emmanuel De Candido, Exils 1914 by Compagnie MAPS…), and alongside others, like with piece Cinéma à 4 mains (Théâtre Royal de Namur) which he directed and acted in. Recipient of a diploma from the Royal Brussels Conservatory and the Eduardo Del Pueyo Musical Center, he studied with V. Delemazure, Teresa Escudero, Burkard Spinnler and Jean-Claude Vanden Eynden, and earned a BA in Piano and Chamber Music, as well as a Master in Piano. Also recipient of a diploma in Musicology from the Ecole des Hautes Etudes en Sciences Sociales in Paris, Pierre Solot gives lectures, publishes articles and regularly collaborates with the Royal Liège Philarmonic. He is also the author of novel La balade de Stiva Leko, which was awarded the 2011 “First Novel” prize by Éditions oléronaises, and has since been edited by them.

Pianist, vocal coach, arranger, composer and actor, Benjamin Laurent holds multiple diplomas from the Paris and Lyon National Conservatories. He studied at the Académie de l’Opéra de Paris while developing a career in France and abroad. Since 2018, he has regularly been invited by the Académie de l'Opéra de Paris as musical director or arranger for operas and recitals (Kurt Weill Story by Mirabelle Ordinaire, Merveilles by Pierre Rigal, Concert de fête, Workshops). A theatre aficionado, he regularly collaborates with playwright and director Julie Timmerman and her company, Idiomécanic Théâtre. As a composer, he is the author of various documentary and short film soundtracks, an opera for children, vocal music pieces as well as various arrangements for the the stage. He also is a contributor for weekly radio broadcast “Les actualités chantées” (France Musique) alongside journalist and singer Cécile de Kervasdoué.

An actor, playwright and theatre director, Olivier Lenel graduated from the Institut des Arts de Diffusion in Louvain-la-Neuve in 2008. Applauded for his role in "Chatroom" directed by Sylvie de Braekeleer at the Théâtre de Poche in Brussels, he then directed "Du pain dans les poches" by Matei Vișniec, "Je voudrais pas crever" after Boris Vian, "Les Nuits Blanches" by Dostoevski and "Jackie" (drame de princesse) by Elfried Jelinek. He also directed "Suzie & Franck" and "Un silence ordinaire" by and with Didier Poiteaux (Press Favorite at the 2019 Rencontre de Huy, nominated at the Belgian Critics' Awards - Prix Maeterlinck de la Critique 2020 and programmed at the Doms/Avignon in 2021), as well as a piece for young audiences, "Tom" by Stéphanie Mangez. After working as director on "Orgasme et violon" by Philippe Beheydt, in which Emmanuel De Candido acted, Emmanuel invited him to become a member of Compagnie MAPS in 2014, to co-direct "Pourquoi Jessica a-t-elle quitté Brandon ?" (Label IMPACT 2021 and Prix des Lycéens 2020 du Festival Impatience in Paris). In 2021, he directed "La Ronde Flamboyante – pièce (il)légitime d’un fils du colonialisme" by Emmanuel De Candido, avant-première at Théâtre de Liège (Emulation), whose final installment will be presented in 2023 at Théâtre de Liège and Théâtre des Martyrs. In 2022, he co-directed "Un pays sans rivière" at Théâtre National.

“That's all there is to say: it's a master piece!”
- Jean-Luc Porquet

“Both funny and efficient, scary too in the way reality catches up with the virtual world and goes beyond it.”
- Marie-José Sirach

“A show both playful and useful, funny, dark, at times unsettling (…) A piece à clef, that, like a puzzle, criticizes hyperconnection: wickedly smart in its form, enthralling in its content.”
- Marie Baudet 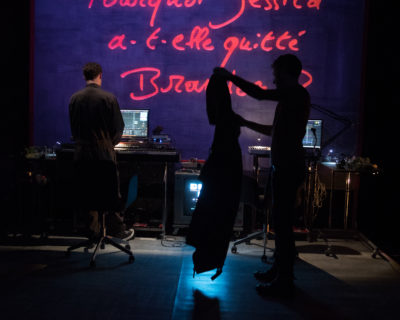 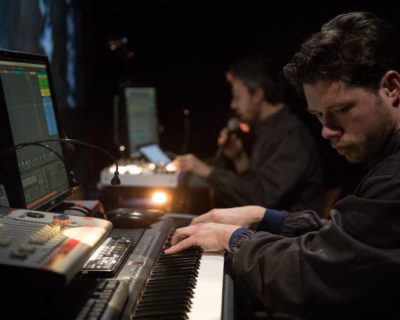 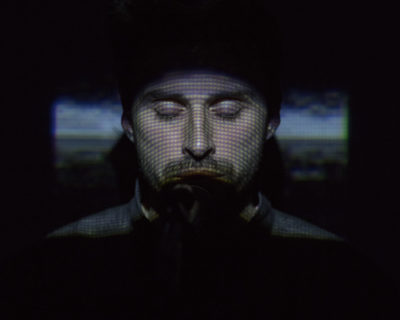